YOU ARE AT: Home » News » Company News » New from LELO: ‘the most high-tech, high-performance male pleasure product in the world’

New from LELO: ‘the most high-tech, high-performance male pleasure product in the world’ LELO has unveiled what it describes as ‘the world’s first sex-tech platform with a freely available Software Designer’s Kit’ and the company claims its launch will herald major changes in the pleasure products industry. Called F1s, LELO debuted the luxury male sex-tech console at Venus Berlin, with a replica Formula One car to emphasise the concepts of performance and pleasure that the device is said to encapsulate. 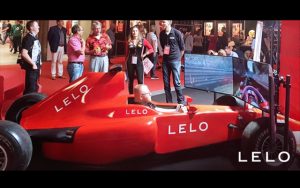 F1s uses the same Cruise Control and SenSonic technologies that LELO introduced at last year’s Venus Berlin in its Sona and Sona Cruise female products, and the company says that following the Sona launch it was inundated with requests to apply the technologies to a male-focused product. The F1s retains Cruise Control, which controls and maintains the intensity of the sensations so it never drops in power, and LELO says the SenSonic technology has been refined for men, “Recreating the earth-shattering pleasure women have been enjoying for a year now”.

In a public statement announcing the launch LELO said: “In the world where every experience should be mindblowing, F1s is the most high-tech, high-performance male pleasure product in the world, and the most interactive. F1s can be connected to your smartphone via Bluetooth, and a LELO app adds a new immersive experience to male pleasure. Just like a luxury racing car, it will satisfy both the top performer who wants to test his prowess and the regular Joe who’s after a good time.”

The company is keen to emphasise that F1s is more than just a pleasure product though: it describes it as “A ticket to the future of sex-tech” as the freely available Software Developer’s Kit gives developers free reign to control the interaction with the device and fully capitalise on its technical capabilities.

LELO F1s Developer’s Kit Red is now available for pre-order on LELO’s website with a special introductory price of €149.